Somewhere between 6 and 8 years ago, my mother in law bought us a George Foreman grill for Christmas. I often make toast from my homemade bread in the George (as we affectionately call it), since my bread is usually either too thickly sliced or too small dimensionally for the toaster. Trust me, since it comes pre-buttered, it's wonderful with eggs.

Of late, I've been seeing lots of people making paninni (or is it pannini? I'm confused by that spelling). When I study the pictures, I realize that's just a fancy name for grilled sandwiches. I love grilled cheese with tomato, grilled ham and cheese, whatever. So, for lunch yesterday, I made these for us. 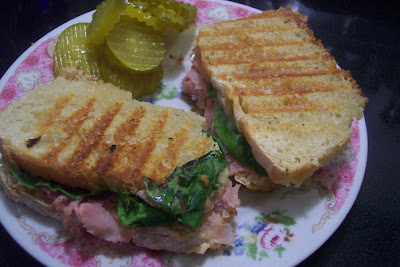 Slices of turkey and ham with cheddar cheese and spinach, assembled on cute little pieces of sour cream bread, and grilled. I guess it qualifies as paninni. I served them with a boatload of sweet pickle chips, another thing I just adore, and everyone was happy. And when I told my dearly beloved that these now have a fancy name, he gave me a very (un)enthusiastic, "So?"

And since it was a cold, rainy day, a hot sandwich makes the world a friendlier place.

From this lazy girl's kitchen to you, Happy Tuesday. Enjoy a paninni, made in the George Foreman grill like mine, or in a real paninni maker if you're fancy.

Email ThisBlogThis!Share to TwitterShare to FacebookShare to Pinterest
Labels: lunch

I used to have a George ~sniff~, but it went down with the ship in the big flood of 2005. I won the pannini maker at Foodbuzz and was so happy because I missed my George so much. Try grilling so veggies on it YUM!

You're right warm sammies on a rainy day and Mom's homemade bread to boot...can it get any better?

nice sandwich - I have a panini thingy too but its easier to use the grill pan with a bacon press.....

I had a George but gave it to my Dad because I never used it. Once I received my panini maker I realized they were pretty much the same thing. Your sandwich looks terrific.

I want a George!!! Your panini sandwiches look awesome, especially made with homemade bread. I really like how you used spinach as your greenery. The tomatoes around here are pretty blah until summertime arrives, so I've only been eating the little grape ones lately. I've always spelled in panini, and pronounced it pa-KNEE-knee. No matter how it's spelled or pronounced, they are always awesome. I love pickle chips, too. I mostly eat the dill variety, but will never say no to sweet ones, too. In fact, I used to work years and years ago with a gal who loved grilled cheese, bacon, and pickle sandwiches! Gosh, I haven't thought about her for years! By the way, you could never, ever, never be classified as lazy!

How YUMMY do those look?! I don't have a George, so I just use two skillets to make my paninis... =(

mmm...your bread looks wonderfully and perfectly crisp. i've always seen it spelled "panini," but it doesn't matter at all--grilled sandwich sums it up quite nicely. :)

everyone is mad on paninis over here

I love hot sandwiches. They're so good. And paninis are just grilled sandwiches on thick bread. But they're still tasty!

Now my tummy is growling!
I never drag George out, because I have so little counter space, but this might get me to change my mind!
Mmmmmmmm !!!

Bread in general makes the world a happier place. But when you grill it...the world gets down right giddy.

What a delicious looking panini, the grill mark making this even more appetizing.
Cheers,
elra

You grilled sandwiches sound delicious. I think I'll make some bread tonight and have warm sandwiches for lunch tomorrow.

In England, we used to just call panini (or however you spell it) toasted sandwiches, or toasties for short. They've been around for years, but I guess people think they're something new if you call them panini. :-)

I made this cake today and was disappointed with how it turned out. The recipe calls for too much baking powder (you can distinctively taste it in the cake). The cake itself was pretty dense and needed more sweetness.