I got mad at the prices I was getting to repair and repaint 5 ceilings in my house, so I've been working on it.  They're not perfect, but I don't know that the quotes of around $3000 per ceiling were going to give me perfection in a 95 year old house, either.  Besides, do you really look at your ceiling, as long as it's all the same color?  I rest my case.

Between Bebop and humans, we had visitors for 2 weeks, which was fun.  Bebop and his girl are moving back to Philly in a couple of weeks, so they'll be here much more often now!  It's a lot easier to drive 120 miles than 350 miles!

Ryan went back to college, but locally, so he's living at home.  He still doesn't know what he wants to do, so he's attending 2 different colleges with 2 very different majors.  And Mark starts his senior year on Tuesday.  Can you believe that my baby is almost 17, and starting his last year of high school?  He will be driving his Lincoln Town Car to school.  Of course he's driving a "land yacht."  First, he's almost 6'6", which is hard to squeeze into a small car, and, secondly, I want him safe.  Surrounded by iron.

Jeffrey is buying a house!  His closing is Tuesday!  I am so proud!

And Kellie and her fiance are buying a house; their closing is in October.  Imagine; I will have four children who are homeowners.  That makes me very proud, and feeling very old.

And, no recipe, but I made zucchini apple bread (think zucchini bread, with shredded apple, grated nutmeg, crushed allspice and cinnamon added).  It was durn good. 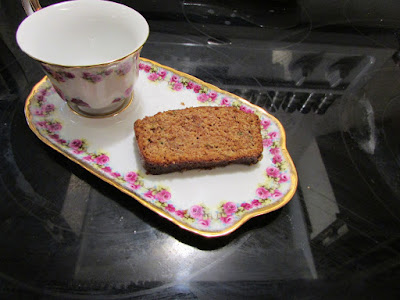 Happy Labor Day, everyone; I'll try to regain some semblance of posting once life is settled into the fall routine.

i love your plate!
and you should be a very proud mama! your comment about the land yacht made me recall my cousin's vehicle during high school, what we affectionately referred to as the boat! :)

I love that Ryan is going to two colleges and doing two majors to figure out what he wants to do with life... smart kid!

Mark will fit nicely in the land yacht - he needs room to stretch those long legs. I can't believe he's a senior. Meg will be in 8th and Chase in 6th this year. Time is flying too fast!

Congrats on the four homeowners, although I am not surprised. I knew your kids would all do well because they have such a great mama!

Wow, I'd be painting those ceilings, too, at that price. How about a paint party next time the whole gang is home?

You sound as if your family are all doing well, and wow, since I started following you they have all suddenly grown up! Ryan doing two colleges is amazing and hard work I would think as well.
We have also been painting ceilings, and renovating the spare room as well. On moving the cupboard in the spare room we discovered that the skirting had collapsed and the plaster was coming off the wall. Old houses, no damp course...... It has been re-plastered and new oak skirtings put in so hopefully it will last our lifetime. Someone else's problem after that!!
Keep well Diane

Marjie! I just saw your comment left on my blog from a while ago! What a delight that was to hear from you! I don't receive notifications, so I didn't know! I check your blog often, although I don't log in, but figured I would do so now. Glad the machine remembered my password!! I think about you and your family all the time. I CANNOT believe how much everyone has grown, especially your two youngest boys. They are MEN now!!! :) That grandbaby is a living doll, and all the new pets that have joined your clan look like they have figured out the big red protector is the go-to person! I can't figure out how to leave an email, so I'm posting here. Looks like life is as busy as ever in your neck of the woods! Seems like so long ago when we first chatted during our Calvert days. What a great program that was. I miss it! :)

What wonderful news on all accounts, Marjie!!! You sure should be one proud Happy Momma & Pappa too:)

I'm with you on the ceiling. Heck a 95 year old house needs a little character on top anyway. Think of it as going gray and a quick in house dye job!!!

Thanks for sharing, Marjie :) Thank you so much for the kind words on my blog too. Yes, Mike is a very special person and I've known him for 17 years. We figured it was probably about time, lol...