And So Goes Another Week...

So...I was going to post about Cass' birthday, and carrot cake, and hot fudge sundaes, and all kinds of whatnot.  And then life happened.  We've had electricians in since last Wednesday (yes, 8 working days) replacing breakers in all of the electrical panels.  There's a new thing called arc fault breakers, and they're supposed to be like the funny outlets in your kitchen that shut off when something's amiss with the circuit.  We've lost our appetite for fire, so rewire we must.  Fun stuff, especially when they're shutting down power one place or another.  Shutting down the well pump for half a day was especially fun.

And then Mark goes for his road test next week, so I hired a driving instructor to take him out for some lessons; that way he can parallel park in that guy's little Honda.  I know it's impossible to pass in my Town Car, because the parallel parking place just plain isn't big enough.  I had to do the same for Ryan after he failed his first road test because he couldn't fit my Cadillac into the parallel parking spot. He never even got out onto the road.  So Mark's had 2 lessons this week.  Plus, he had to go for his senior portrait yesterday afternoon.  It almost feels like we're on the all-Mark channel here.

So I'll leave you with some pictures of one of our dogwood trees. 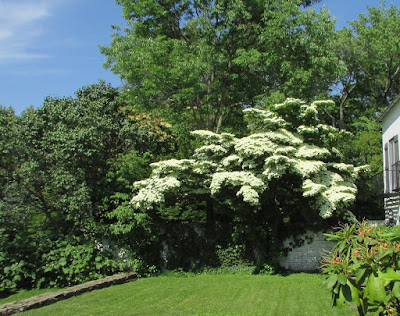 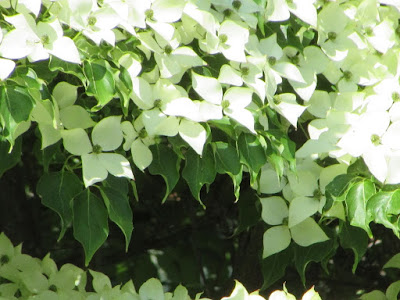 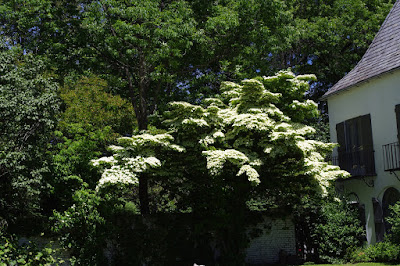 Hope you have a nice weekend! Those dogwoods are beautiful!

I like your plan using a driving instructor. Hope things are bad to normal soon.

You must be so tired of workers swarming around. Are you almost back to normal?

Please do post about cake and hot fudge sundaes. Those are important topics.

i love dogwoods! even if they weren't the official flower of my home state, i'd think they were just as lovely! :)

Life is busy for you!!

Exciting times for Mark. Senior portraits? Time is flying by!!! Learning to drive is scary but fun. Good luck to him!

Your dogwood is gorgeous. We have a pink dogwood - we love it.