I know - how unusual!  I went with Shannon to a wedding dress try-on on Saturday, down near Philadelphia.  Of course, you all know it's been bitterly cold here for weeks.  So, on Friday, my dearly beloved announced that I'm "too stupid" to drive 250 miles alone in the cold, so he hired me a driver.  It's nice to be loved, isn't it?  Anyway, that 4 hour ride gave me time to read a book, so here's your review! 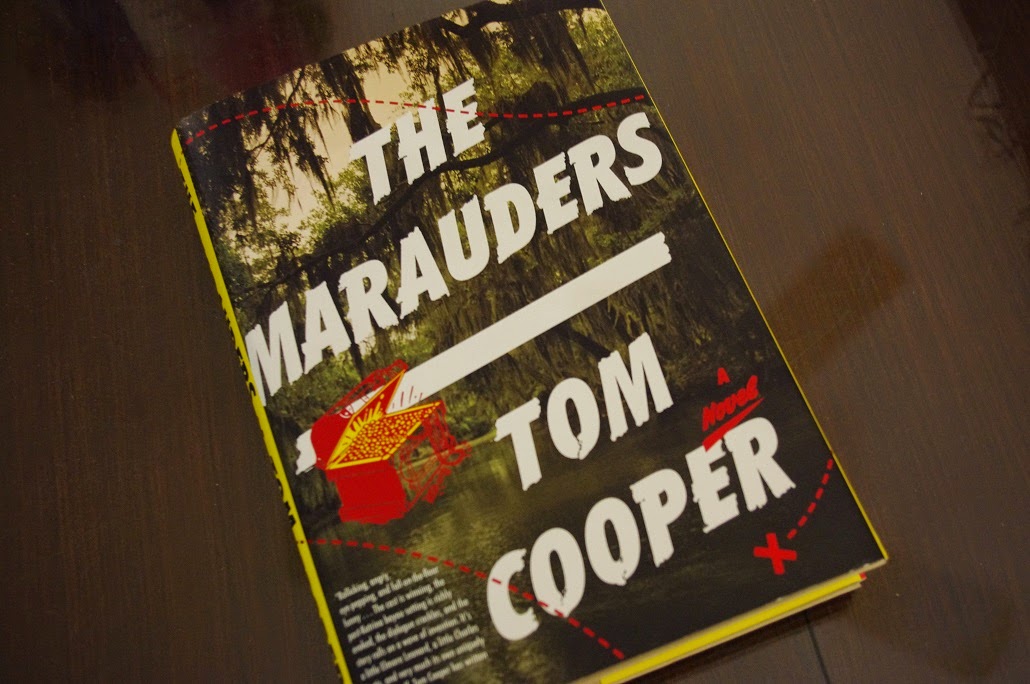 THE MARAUDERS
By Tom Cooper

This is set in the bayous of Louisiana, 5 years after Hurricane Katrina, and after the BP oil rig explosion.  There are a fair number of parallel stories, which intersect through the book, not necessarily at the same time.  Almost everyone in the town is a shrimper, and the haul is nothing but meager, small shrimp this year.  Wes Trench, 17, works with his father, both mourning for and blaming his father for the death of his mother when she slid off the roof of their house into the floodwaters following the hurricane.  One day he became irate and quit, finding himself a position on a trawler captained by Lindquist.  Lindquist's wife left him, fed up with his lifelong obsession with finding Jean Lafitte's treasure; he's out there every night hunting for that gold, using maps that he has meticulously marked up.  Then there are the Toup twins, who grow great weed on an island in the bayou, and shoot anyone who gets near their hydroponic greenhouse.  Cosgrove and Hanson, who became acquainted while in jail for petty crimes, and drifted into town for jobs cleaning oil coated birds, and stumbled into the Toups' operation.  Then there's Brady Grimes, born and raised in Jeanette, who couldn't wait to get away.  Then BP sent him back to Jeanette to get people to take petty settlements so they couldn't sue BP.

The settings were very well described, and the characters felt real.  The book was dark and funny at the same time, and completely "politically incorrect" in the way folks talked and thought.  There really weren't any happy endings, merely some contented endings, and some not so contented, much as in real life.  I very much enjoyed this book, and was sorry to see it end.  5/5

Disclaimer: I received this book from Blogging for Books for this review.  All opinions are my own.

Happy Monday, everyone!  Stay warm!
Posted by Marjie at 6:19 PM

I think my brain has frozen along with the snow. My reading is way down, but I'll add this one to the queue.

Boy that man of yours is something else Marjie! Definitely a keeper!!!

I wouldn't want to make that drive in this weather. A driver would be fine by me.

I hope you had a "tolerable" time dress hunting. It's difficult enough to do under any circumstances but in this weather, UG!

Sounds like you enjoyed this book. I just don't seem to have any time for reading. Maybe I need a driver, lol...

Thanks for sharing, Marjie...

I absolutely adore your husband.

I think we all want to borrow your hubby.