Thorsday Book Review: The Lady and The Unicorn 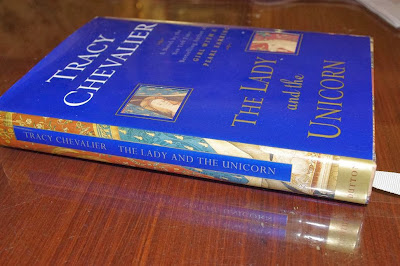 Isn't it pretty?  And once I saw the cover, and discovered that it was written by the author of Girl With a Pearl Earring (fine book and movie), I knew I had to have it.

THE LADY AND THE UNICORN

The artist Nicolas des Innocents, a talented painter of miniature portraits, was commissioned by Jean Le Viste to create tapestries for the walls of his banquet halls.  M. Le Viste wants battle scenes, but his wife convinced Nicolas to draw unicorns instead of battles, stating that they will be less discomforting for their three daughters, one of whom will inherit the house, including tapestries.  Nicolas, a charming man, tried to seduce the lady of the house, her daughter, one of her ladies in waiting, and a house maid, naturally creating havoc within the household.  After his drawings were completed, Nicolas was then sent to Brussels to meet with the master weaver, assist in reproducing his paintings full-sized for the weaver, and oversee selection of the colors.  There are three sections to the book: commissioning and painting of the original designs, weaving of the tapestries, and the unveiling of them in the Le Viste home at his daughter's engagement banquet.  Each chapter in the book was told from the point of view of a different person, and the events rarely overlapped, so a complete story was told without repetition.  The author also created a plausible explanation as to why, although the tapestries tell a story, each lady is different, and who each might have been.  I very much enjoyed this book.  5/5 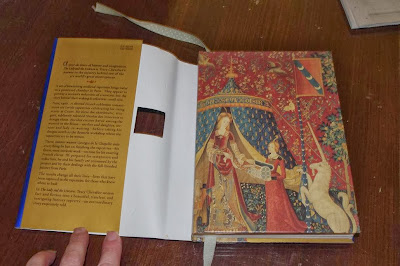 I was also delighted when I pulled back the dust jacket and found a reproduction of part of the tapestry!  It made the story just a little more complete for me.

Happy Thorsday, everyone!
Posted by Marjie at 6:22 PM

It is a pretty book and it sounds really good too!

That book is lovely. Someone gave me a needlepoint kit of that tapestry. I haven't gotten to it but maybe someday.

I love that tapestry, or at least, the images I've seen of it. I keep meaning to read the book for the same reason.

Both the book itself and the story look delightful.

What a delightful looking book. I would also have bought it because I like the look of it. Have a good day. Diane

Sometimes you can judge a book by it's cover.