After yesterday's post, you are probably thinking, "Dang!  I want lots of pie!"  That naturally leads to the thought, "Dang!  I need lots of pie crust!"  Remember how delighted my dearly beloved was when I discovered the Best Pie Crust Ever?  And I was equally pleased, because it meant I can pretend to not be Pie-Crust-Phobic?

Well, I made three batches of pie crust (this is the third time I have done so), and I'm here to show you how to do it, so you'll always have crust at the ready, in your freezer.

HALF AND HALF PIE CRUST

I made this batch in the mixer, so it's easier to see, but I usually just whip it up in the food processor.

Beat together or pulse the butter and shortening until it's an even color. 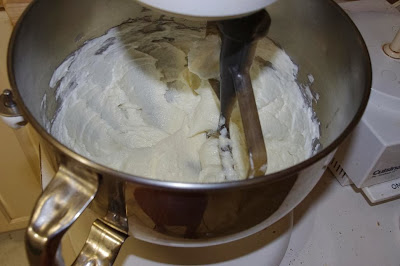 Add the sugar, salt, flour and powder, mixing or pulsing until it's grainy.  Add the lemon juice. 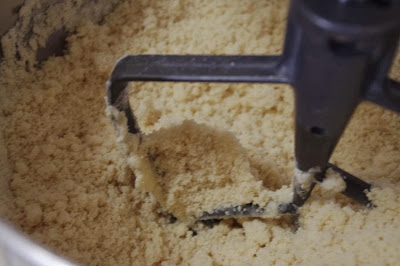 Drizzle in the milk, until the pie crust dough holds together and forms a ball. 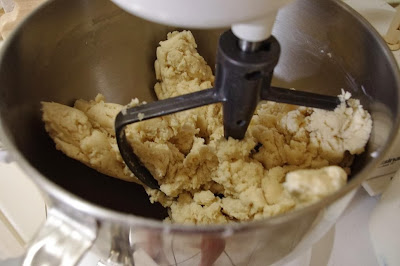 Split it in half.  I always use my kitchen scale to make sure my pieces are even (see the extra lump on top?  That's because the two halves were uneven). 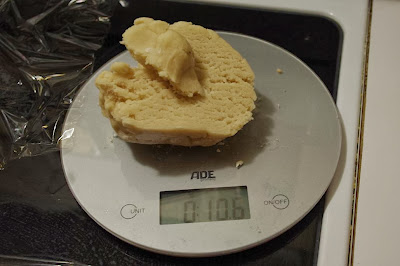 Flatten down into two rounds, approximately 4: diameter each.  These can be rolled out to form crusts for two single crust pies, or a two crust pie.  If you make multiple batches, each piece can be double wrapped in plastic wrap, then put in a zip-loc freezer bag and refrigerated or frozen for at least 3 months (I've not left them for longer than that). 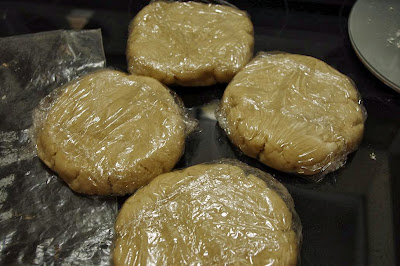 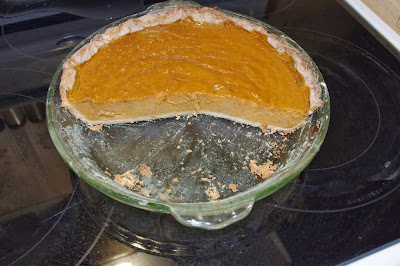 Have a great weekend!
Posted by Marjie at 3:41 PM

It could be time for me to try your pie crust :-)

I love everything that can go into a machine and be ready in minutes. Looks like perfect pie crust to me.

I don't know if you noticed, but a mastiff was one of the dogs the pilgrims brought with them, I thought that was pretty cool (also a springer spaniel). Of course I thought of you when I wrote it.

What a great idea!

My daughter made a pie recently but we cheated and used a frozen pie crust that has been in my freezer for awhile.

Next time, I will be using this recipe!

A pie made with a good homemade crust cannot be beat.

I'm all for making more at one time and freezing for later!

I'm really, really, really going to try and make my very own pie crust this year Marjie. We got the most awesome apples from the orchard the other day. They really need to be appreciated in a home made pie crust.

Thank you so much for sharing...I'll let you know how I do:)

Mmmmm that looks so good. Have a good day, Diane

I probably won't be doing this.

You're such a better pie maker than I am.

even after years of baking, i'm still looking for my ideal pie crust. this is one i haven't seen and will definitely try!

I DID it! I made Your pie crust and I am so excited!!! I think the highlight of my Thanksgiving is going to be eating that pie!!!

Thank you so much Marjie...I "heard" you whispering in my ear as I trudged along. It was pretty simple and I'm sure I will get better at it!!!

Thank you so much, Marjie. Have a wonderful Thanksgiving with your family Marjie. Stay safe and warm:)