Oh, yes, I know I'm very late in my post-holiday greetings.  But it's not my fault.

For months, I've known that I had to go to the 5th of July wedding of my oldest daughter's best friend since second grade.  And you know that my dearly beloved was having a fit over having to get dressed up and go to this event.  But this girl called me personally to make sure we would come, and so we did.

Of course, it wasn't until I saw the invitation in April, which said "Black Tie Preferred" that I began to worry.  And it wasn't until the week before that I decided to think about my attire.

It's OK.  I decided on Wednesday night that I'd wear a long dress to both the ceremony and reception.  And Thursday morning I settled on the design.  And Thursday afternoon, I settled on the fabric, cut it out, and got rolling on the dress.  No worries; we didn't have to leave for the wedding until 3PM Friday, and the dress was hemmed by 2.  Plenty of time to get dressed, do my hair, etc. 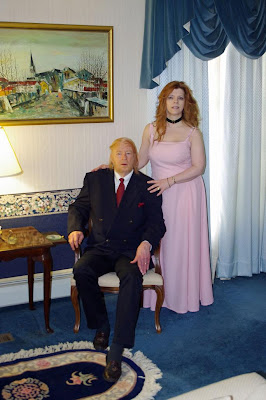 And didn't I look great with my dearly beloved?

OK, so in fairness, these pictures were taken between the wedding and reception, and the humidity was about 200%, so my hair wasn't as good as it had been 4 hours earlier.  But you get the idea. 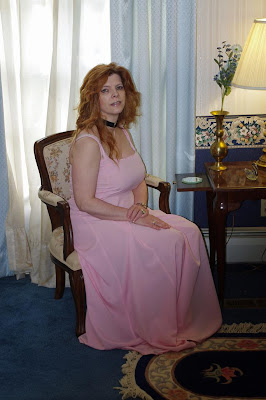 And I was going to post these pictures over the weekend, or maybe Monday.  But we had a fierce thunderstorm around midnight Friday.  Evidently, a lightning strike fried my modem, router, and one phone line.  That was way more fun than a human has a right to have.  And it's only been fixed today.  My business email was stuffed, absolutely stuffed.  So, now that I've let you all know that we're still alive and kicking, I need to get back to work.

And here's an obligatory picture of Brutus, nesting in some laundry. 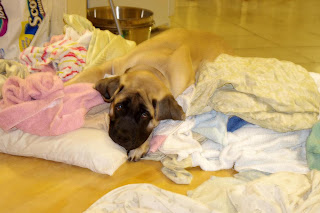 So, happy Tuesday, everyone!
Posted by Marjie at 3:17 PM

You are crazy!!! I wish I could create such awesomeness that fast!
Beautiful pics!

I'm glad you explained, because I thought this was a photo of the royal family (not the chinless ones, the good looking ones up north).

You guys clean up really well but I must admit that is the first dress I've seen anywhere close to below your knees much less below it. :-) Enjoyed the look and hubby has on a spiffy suit.

Oh Marjie, you both 'scrub up' beautifully. I hope you had a lovely time. Your dress is so lovely and I am in awe of your sewing skills once again. We are off to our nephew's wedding this coming Saturday. Could you pop over and make me a dress too???? Smooches to Brutus. No worries, and love, Carol (and Stella and Rory)

You both look totally fab! Sorry about the icky weather.

Love your dress and like me you also obviously like pink. I think it goes so well with a head of red hair. Sadly mine is not as red any more! Great picture of the two of you. Brutus is a darling. Keep well Diane

What a lovely couple! The pink dress - and you, and your hair too - are all stunning. I'm in awe that you whipped it out so quickly.

Love the Brutus shot. Thanks for humoring his fans!

What a lovely gown! My daughter, who is playing with my hair as I type this, said you look really good in pink and she loves your necklace.

Brutus is too cute for words. Wish he and Grace could play together.

P.S. I am in awe of your sewing skills!

What a handsome couple!!

Reminds me of a Christmas party when I decided that morning that I didn' t like my dress and made a three piece outfit that day to wear that night. It was one of my favorites for years

You did very well with the dress! Obviously you are a great "under pressure achiever" !

A day - you made that lovely dress in a day ? ! You two look great, definitely worth getting all dressed up :-)