Well, the snow is about over, although grey skies remain.

Do you officially have a lot of snow when it's up to the knees of a guy who's over 6 feet tall? 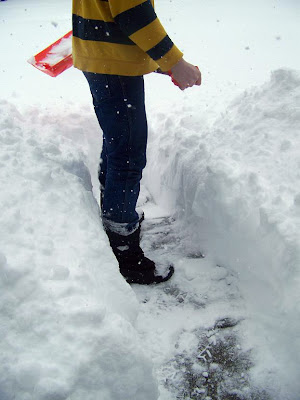 How about when you can barely recognize your giant Dodge Ram pickup truck? 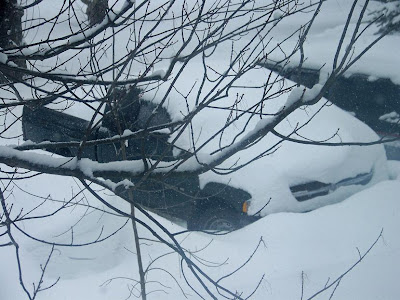 How about when you can't distinguish between the cars outside? 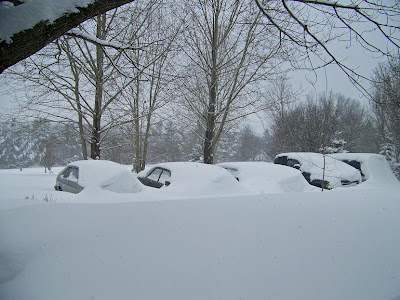 Or, maybe you know you officially have a buttload of snow when your plow guy gets stuck, and after an hour, abandons his truck, saying he'll be back tomorrow with his tractor to get it out. 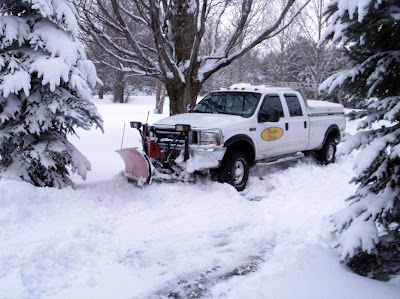 Then you follow George's idea, and make snow ice cream!

Either plan ahead, and put a bowl out to catch the snow, or send your kid out to a clean area to scoop up some snow from a deep area, being careful to skim the top only.

In a measuring cup, whisk the sugar into the milk until it's well combined. Stir in the extracts and cream, 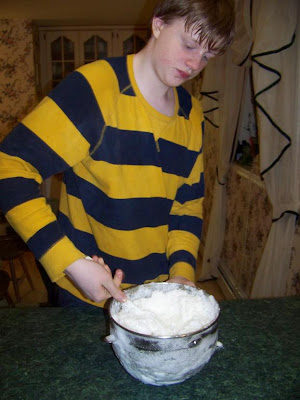 pour over the snow, and stir this mixture into the bowl of snow. Stir until it's about the consistency of ice cream. 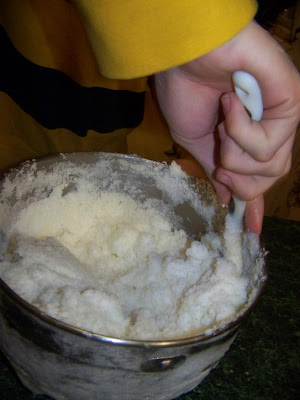 This will be much lighter than ice cream, so a giant bowl of snow ice cream will be equivalent to about 1 or 2 scoops of normal ice cream. 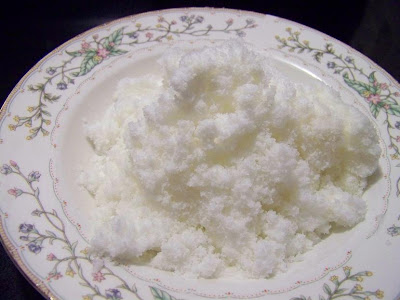 While it doesn't have as strong a flavor as churned ice cream, it's lots of fun for the kiddies. So, next time a nor'easter wallops you, make snow ice cream! Thanks for the idea, George!
Posted by Marjie at 5:43 PM

That would be a pretty cool snack :)

I totally LOVE the idea of snow ice cream! We've been deprived of the white stuff this year, but thanks, anyways!

Sounds good, I'll have to remember it next year.

Love that the plow got stuck!!

Oh man, it's bad when your snow plow guy abandons his truck!

You might just have a little more snow than we do!

As for the snow ice cream...boy does than bring back childhood memories!

What a friend! lol!
Hmmm...Are there any calories in this? ;-)
Thankfully, this isn't a recipe I can make right now, since we're coming to the end of summer here in Oz. I'll save it for later...okay? ;-)
I haven't had snow ice cream in years, but it sure looks good enough to eat!

The car on the far right is the tall one! Does that help?

Mother nature overestimated the amount of snow icecream your lads could eat, looking at how much she dumped in your yard - but ehat a great way to use some of the cold white stuff.

That looks very familiar! You'll have to tell the ploughman that a little truck is not enough for such an amount of snow! He'll have to bring his BIG Truck straight away next time! The snow ice cream is a great idea. My son loved to eat snow when he was little. Old wives tales said you shouldn't cause you could get worms, but we never saw a single worm.. So we just let him enjoy his snow ice naturel!

Another good use for snow!

wow, wow, wow!! I can't believe how much snow you guys have!!

Snow ice cream is a FANTASTIC idea--if you can't beat it, enjoy it :)

women and all said...

is healthy to eat???

Glad to see snow is good for something!

no way! that's so cool! I had no idea you could do that -- way to make it a fun day, even when the weather's not cooperating!

My mom used to do this with me when I was a child. Too bad we live in CA and I can't do it with my som.

We don't even have a snow shovel! I'm sure my kids would be happy to shovel some snow cream into their mouths, though! :-)

wow - I;vce never heard of snow ice cream before - that is the coolest thing I've ever heard of! ( no pun intended!!!)