Only Dan and Jeff came home for Easter, so I only had 7 people to feed.  Yes, I know that most people think 7 hungry people, mostly men, is a lot, but around here, that's sort of "Oh, well, it's Tuesday."

Table looks rather empty, doesn't it?  Lamb, heart-attack potatoes, sauteed asparagus and glazed carrots were on the menul 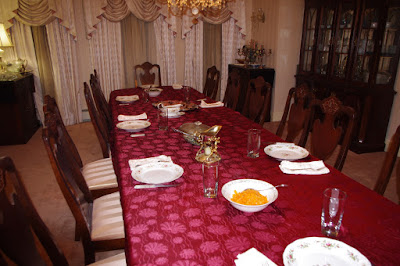 Of course, Ryan and Dan were the first to arrive and want to be fed. 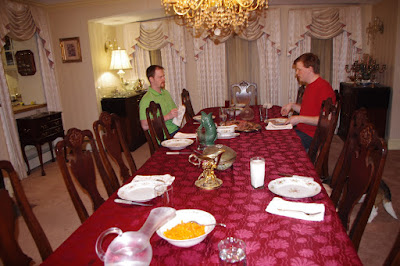 Tank said he was a good boy, wearing his Easter bandana, and hoped someone would share. 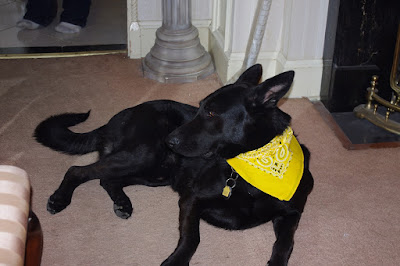 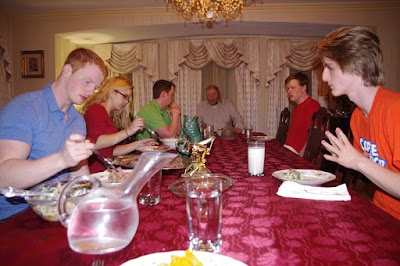 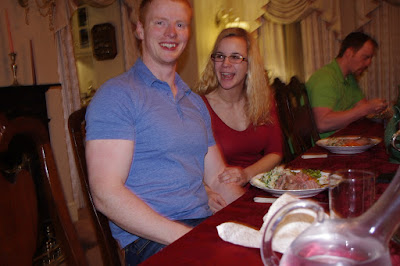 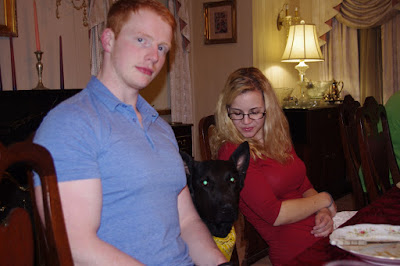 Seriously, people, share!  What, are you all afraid of the Fierce Midget, who says dogs can't be fed from the table?  Really?  She's way down there! 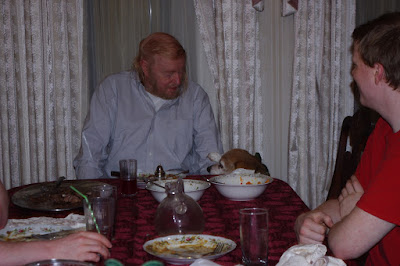 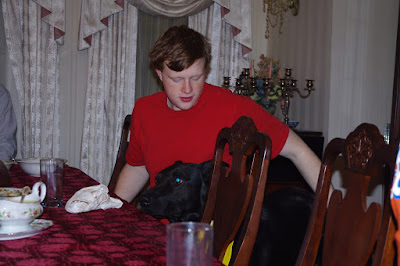 Both dogs came to see Ryan.  He must smell like a sucker. 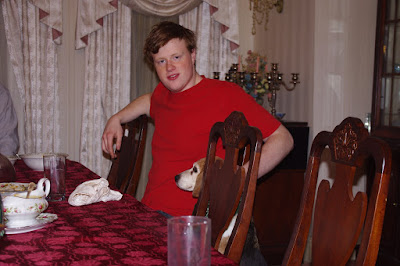 Both dogs visited the Great Red Protector, too.  He definitely smells like a sucker.  I do have to say that even though Tank's head was on the table, he is afraid to touch anything on the table.  Jeff has that dog superbly trained. 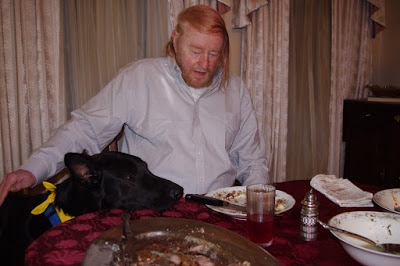 Hope you all had a good Easter, filled with family, friends and good memories.
Posted by Marjie at 5:45 PM

Love to see your holidays around the table and always love your menus too.

I think that is the most empty that I have seen your table!

i'm starting to get a little crazy about tablecloths, and yours is lovely! i blame my future mother-in-law, who has already given me 5... :)

Your table looks so empty without all of your kids there. I am sure the food was very delicious... both pups sure seem to think so!

You must find it very strange having so few at home for a holiday weekend. 7 would be plenty for me but then my table only sits 6 comfortably :-))) Hope all is well. Diane

Yes, I think that is the most "empty" I've ever seen your table for a holiday! :) Hope it was a great one!

Looks like you didn't spend as much time in the kitchen this year. I have lost track and need a list of your kids in order. Now that there are spouses and significant others, it's too confusing. And when are we going to get some baby news?

We are coming to your house next year
Lily & Edward

I'm with Sue. Kids order with spouses. Looks like your day was lovely. Sunday night before I had cleaned the kitchen, I heard slurp, slurp, slurp. I said to JB what is that dog up to? So I go into the kitchen where Beau is standing with all 4 feet on the floor, head tipped way up licking the ham juice off the cutting board. Silly dog. He'd have been dead if he had stole the ham!! g

Seven for dinner is five more than we had around here, Marjie. Although, I must say, Marion put away enough roasted chicken to feed an Army. I wonder sometimes if she's stashing food somewhere, lol...

Good boy Tank, I hope you at least got an Easter bunny. Oh wait, our canine friends aren't "allowed" to eat chocolate are they? Or is that just Iggy, I get confused:)

Thanks for sharing Marjie...I hope you all had a wonderful Easter!!! Now, when is the baby coming for a visit or are you going there?

Wow! I knew that it had been a long time since I last checked in, but those kids have all grown so much! I've missed so much by not blogging, and I'm going to do my darndest to get back into the swing of things. Fingers crossed, anyway. ;)