So, how many of you have signed up for ancestry

So, I signed up.  And I spent many hours watching TV while searching into both his and my ancestors.  And I found some expected things, some unexpected things (ancestors who were Tories, and left for Canada in 1777, along with some who stayed).  I found my grandfather's parents, whose names I didn't even know, but not complete information because of the commonality of the name.  And I learned that his mother's genes have doomed every one of her descendants (and her siblings to the extent I can find them) to a very short lifespan.

To back up a bit, when I was a child, there was a 3"x4" picture of a young man in a military uniform in my grandmother's house.  So when I was maybe 11 or 12, I asked who the "soldier" was, and they told me it was "Uncle Jimmy," who left home in the early to mid 1950s and never came back.  So, in 1987, I decided I would find the missing Uncle Jimmy, whose name was actually Robert.  Confused yet? Me, too, when I learned that Jimmy was short for Robert.  So I actually found his son, who said his father was an orphaned only child.  Well, then.  But he spoke to his father, who eventually admitted that I was his relative, but didn't want to speak to anyone from the family; he was happy being an orphaned only child.  Fast forward to about 2 months ago, when I got a message through said ancestry website that someone claimed to be the granddaughter of my grandmother.  What? I'm the only granddaughter. Nope.  Not any more. 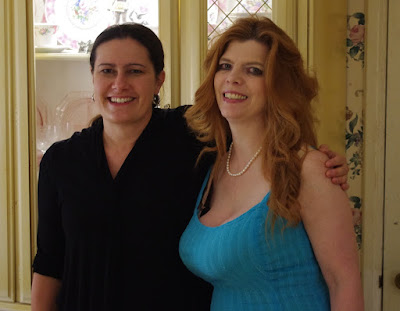 So, this weekend I met my cousin for the first time, and learned that there are at least 3 more cousins out there.  Seems Uncle Jimmy is not forthright with his information, even amongst his children.  But it was interesting to meet her; both of us learned a lot about the family's history.  It is strange, however, to get not one, but 4 brand new cousins when you're as old as I am!

How about all of you; any family mysteries in your background?
Posted by Marjie at 4:24 PM

Sounds like you made good use of the site.

Wow. Well, you both have beautiful smiles, and seem to be about the same height. Did you feel a visceral kinship? I know my dad's lineage back to the 1300's, but very little about my mom's. Her family name is so generic, it would be difficult to track. One of my Norwegian cousins has given this a try, and apparently, some great-grandfather married a 14-year old runaway from Italy or a family of gypsies. Maybe. My grandfather did have jet black hair, so there's that.

That is awesome! Moms brother signed up
Woooooof,
Lily & Edward

Hi Marjie:)
How brave of you to dig into the past. I did some digging about 6 years ago and unfortunately it didn't turn out as happily. Good for you!!!

I saw your post about the bridal shower too. I can't believe it's almost time for the wedding bells, lol...Things are still crazy around here. Marion was in the hospital for a while but she is home now and I'm doing my best to build her back up. It's been quite a Summer!!!

Hope all is well with you and yours. Hope to be back, eventually...

After I started digging into my family history I discovered a niece and a couple of nephews that I didn't know about. I had the opportunity to meet my niece and her family. She provided me with photos of the brother I never met.

I found so many wonderful surprises in my ancestry. From never knowing my father or his family, I've now spoken to his sister and received much info. It seems that my ancestors came here in 1630 and helped found the nation. Who knew!!!

that's incredible! i haven't dared to explore that type of thing, i think i might be afraid of what/who i'd find... :)

Lots of mysteries in my family up here, but ain't buying into ancestry.com. Got a cousin and a brother who do a pretty good job filling in the blanks.

Wow!!! Uncle Jimmy is a secret keeper! I think it's really neat that you are doing this... my mom and a few of her family members have done this for her side of the family but I don't know much about my father's side. I love that you now have 4 cousins!

My gosh, Marjie, you look lovely as ever. I haven't been active on blogger for five years, and when I saw this picture I thought, "she hasn't aged a second!" Looks like life in your corner of the world is super active these days. Your kids are frozen in time for me as the ages they were 5 years ago ... goodness, they've all grown up. Especially those two younger boys! You have a lovely family! :)