I recently had the honor of being a beta reader for Honey the Great Dane's person's first adult book.  That sounds like a really cushy job, but it actually involves a lot of thinking, and the ability to be critical without feeling mean!  So I was delighted when Hsin-Yi sent me a gift copy of her very first adult book - only available on Kindle - classic chick-lit!

Leah was a British expat raised in Singapore by her father after her mother died when she was a baby.  At the age of 14, her father abruptly sent her to boarding school back in Britain, and she never returned to Singapore.  One day, she received a phone call from the police in Singapore that her father was dead, killed by a hit-and-run driver.  As she worked to arrange time off from work and a flight, and pack some clothes, her roommate contacted her "first love" from 8th grade in Singapore, over a decade earlier, Toran James, and arranged for Leah to meet him for coffee while she was back in Singapore.

Seems like a simple enough trip, right?  Except that Leah perceives that she's being followed through the airports starting in London.  And her best friend Julie from Singapore tells her that she can't possibly meet Toran, because he was blown up on a yacht a couple of days ago.  Oh, and there's a dead body fished out of a river, and her father's house has been ransacked.  And, yes, that guy is still following her around.

This is a romantic personal mystery: personal because it involves foul play against people close to Leah, and there is some romance involving Toran.  This book isn't "explicit romance" (which seems to have come into vogue of late), and it works well.  Hsin-Yi has done well with her "Honey" mysteries, and she's proving herself to be a good adult author as well.  5/5

Note: I did receive a copy of this book to review, and no other compensation.  All opinions are my own. 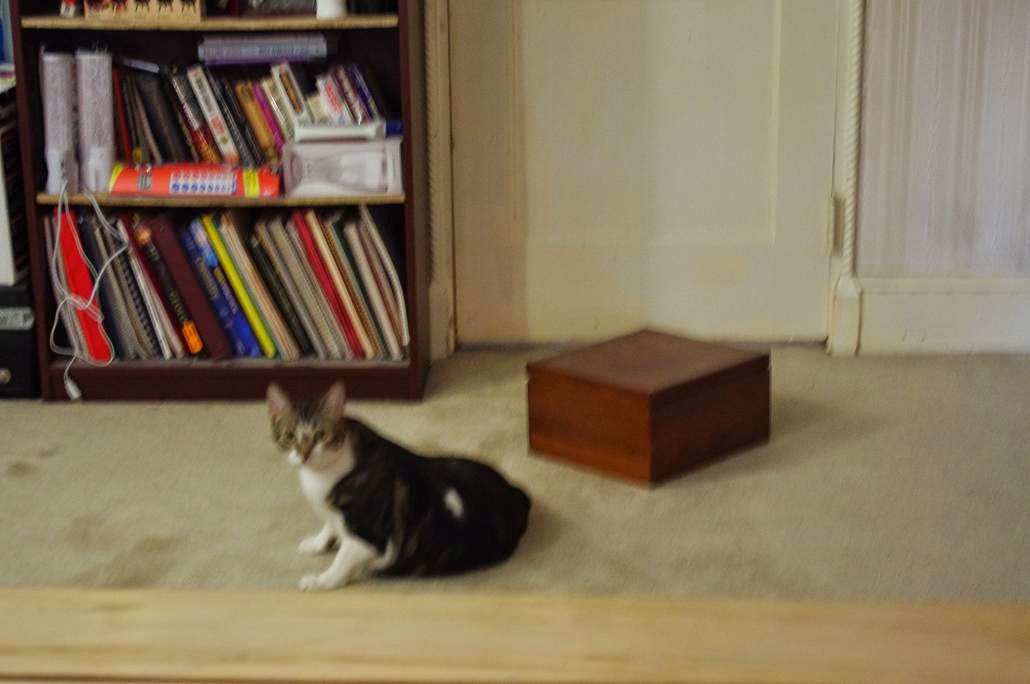 This Thorsday Book review is hosted by Buffy, who looks like she's selecting a book to enjoy herself!
Posted by Marjie at 2:59 PM

Thank you for the review..and Buffy is adorable.

This class has made me so out of touch! I didn't know you had a cat!

Reading? I'm reading less than I'm knitting, which is saying something. What's Buffy saying you should read next?

Thanks so much, Marjie, for reviewing my book - and for being such a fantastic beta reader as well! :-) It was so lovely working with you and your feedback really helped.

Ha - and I love that picture of Buffy - it looks like she would be right at home being one of those "library cats"! ;-)

I'm always impressed that with everything else you do, you still have time to be an avid reader.

Buffy is adorable. I just finished a truly awful book, but I had to see how it ended. Now I'm cleansing my mind with a new Kindle download that seems pretty interesting so far.

How cool is that ! Good for Hsin-Yi!