Jeff and Cass were home the other night, along with the usual residents, so I made two roast chickens for dinner.  Ryan thought the chickens looked picture-perfect, and so I took not only a picture of the chickens in the roasting pan, but also of my chicken carver.  (I despise carving chickens, and birds in general; it's so tedious.) 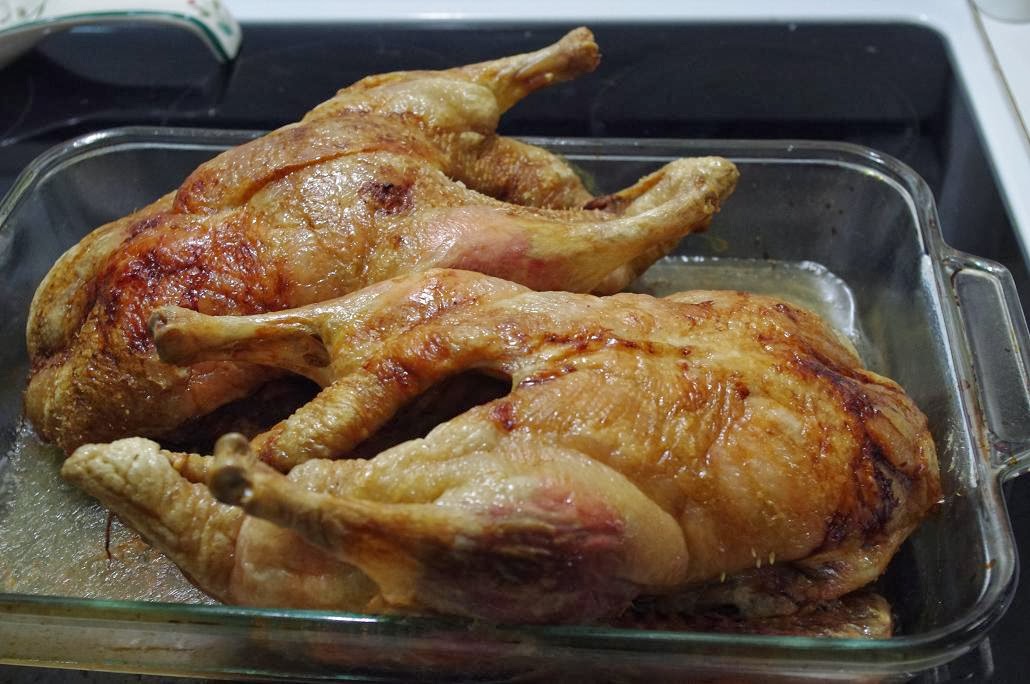 Clean out the bird's cavity, and rinse it well.  Spray the bottom of your pan, and lay 4 carrot quarters under where the chicken will be placed.  Then take one of the onion quarters and separate it so you can lay it out out the layers in the bottom of the pan.  Place the chicken atop the bed of onion and carrot, Then generously sprinkle salt and basil inside the chicken.  Stuff one piece of carrot and one piece of onion between the body of the chicken and each wing, under the skin.  Put the remaining onion and carrot in the chicken's cavity, then rub the skin with oil to prevent it from drying out.  Roast at 350F, 20 minutes per pound in a conventional oven or 15 minutes per pound in a convection oven, until the chicken tests done with a meat thermometer. 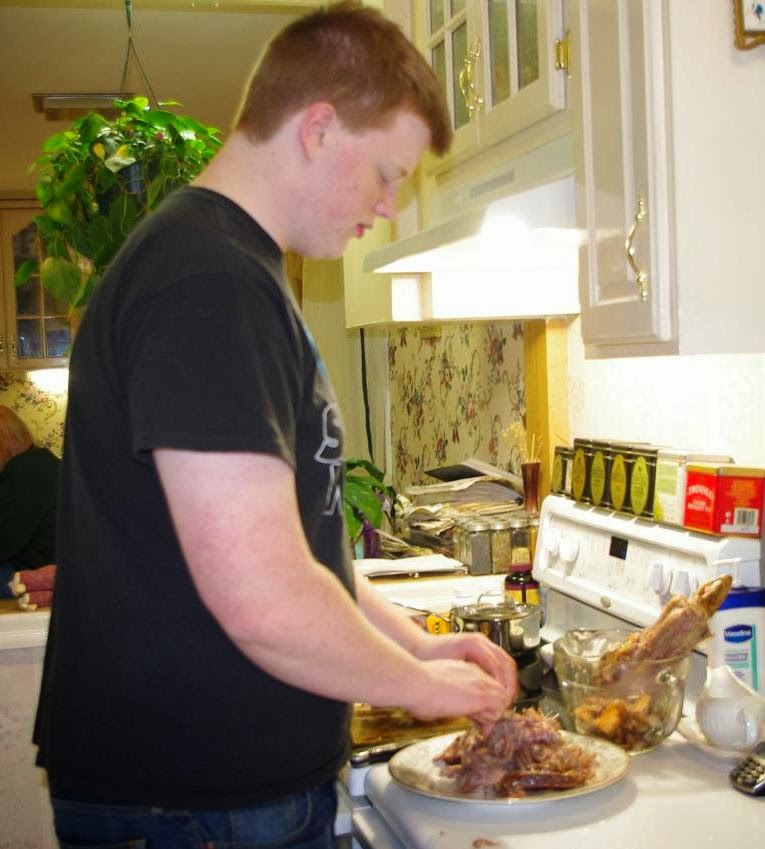 You probably don't have a chicken assistant who's as enthusiastic as mine, but he and his fellow diners all said this was a great chicken.  Don't believe me; you have their word on it!

Happy Weekending, everyone!  Hope the snowstorm that's coming to the eastern half of the country doesn't put too much of a damper on your plans!
Posted by Marjie at 4:32 PM

Well, I'll be, now that's an interesting roasted chicken method. I will need to remember that next time. Although, I won't be roasting two chickens and I won't have the luxury of having an enthusiastic carver!

Thanks for sharing, Marjie...Good Luck with this next snow storm:)

That's one handsome sous chef. I hope the winds are favorable your way; they say we'll get something in the 45 mph range tonight.

I can't remember ever roasting a chicken in the oven without a beer can, but I have one in the freezer to try.

That looks delish right now... simple, but such a great comfort food! Yum!

I need a chicken assistant because I don't like dealing with bones. I only eat food that's easy. How lazy can a person get, right?

Carving is overrated - we call it 'pull-apart' chicken for a reason ! LOL

The big dinner was Saturday and as usual I attempted home-made pie crust (with the Tenderflake backup in the freezer). One recipe I found online for the lemon and cherry pies and yours for the apple - amazingly enough, they ALL turned out ! The apple was well complimented and you got all credit for the pastry - I'll be making it again for sure. The room temperature ingredients threw me a bit but it was fine.
A question, your one-crust pies don't look like they shrink - I've tried everything - have you got a secret ?

I've never thought to stuff a little bit of carrot and onion between the body of the chicken and each wing, under the skin. I'll be trying that next time! The chicken looks delicious.

My roast chicken was terrible on Saturday. I'm so ashamed.

neat method--it's easy but must have delicious results! i just love chicken.