Chicken With Rice and Ugly Cauliflower

It was cold, rainy and blustery last night. I was also inexplicably tired. I had, as Ryan calls it, a "chicken carcass" thawed, so chicken and rice seemed like an excellent choice. I cooked the rice in the oven with the chicken, and it was great!

After an hour has passed, remove the chicken from the oven. Spread the rice evenly around the chicken, sprinkle with the teaspoon of salt, and spread the onion and carrots over the rice. Pour the water over the rice, stir carefully to mix the carrots and onion in with the rice, and return the pan to the oven for another hour or so, until the chicken is cooked. 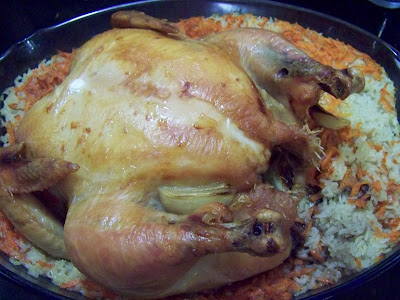 Remove the chicken to a platter, stir the rice, cover it, and return it to the oven. Let the chicken sit about 15 minutes before carving it. The rice is very flavorful, and this is very easy to cook!

For some unknown reason, I had a brain meltdown last night, and didn't make a green vegetable to go with the chicken and rice. Instead, I decided that making cauliflower more interesting would be a terrific idea. Indeed, it was very tasty, but, boy was this cauliflower ugly! 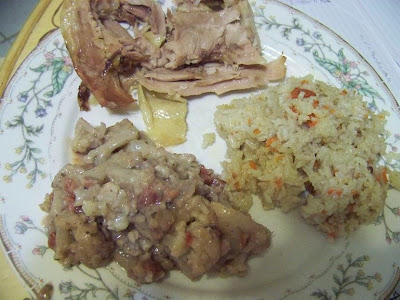 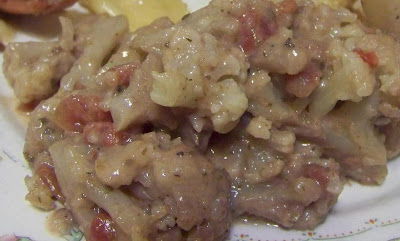 Boy, you should have heard the comments about the appearance of this! But it all got consumed, so I guess everyone got over the fact that it was ugly!

Email ThisBlogThis!Share to TwitterShare to FacebookShare to Pinterest
Labels: chicken, side dishes

Okay, both of these are goin' in the recipe book. "Marjies Ugly Cauliflower" just has a certain 'ring' to it, don't you think?

I don't know why, but I always call a store-bought roasted chicken a "dead chook" (get me a dead chook, honey) and a raw one is just called a chicken. But with the cost of chickens here in Oz, we seldom have them. I think I better check Costco next time, eh?

if its any consolation thats a real purdy chicken!

I love your chicken carcass recipe! As I looked at the photo, I realized that I've never baked a whole chicken over rice ... I've done parts but not the whole bird. I'll give it a go now. So, who named the cauliflower? I've never had the lovely white veggie prepared with tomatoes before, and now I want to run to the grocery specifically to get the ingredients to give it a go! You can put this on the menu for when I move in with you! :-)

Genius idea adding the rice to the chicken roasting pan. I can just imagine the delicious chicken juices flavouring the rice. I quite often cook rice in the microwave with finely chopped vege and a chicken stock cube mixed in but this is way better.

Ugly caulifower? No, yummy cauliflower, and I wouldn't have to share it with Zebbycat!

Love that your chicken was called a thawed carcase! Rice and chicken are naturals together! Looks simple and tasty.

Re the post before: It was a depressing few days. I hope we can elect some people in November who might actually listen to us. I'm afraid there is a gang of thugs and bribers running things right now. They "won" by overriding the will of the majority of the American people.

I rather eat good than pretty!

mmm...nothing quite like a roasted chicken carcass, is there? :)
i think it's impossible to make cauliflower attractive, even in its raw state. that said, i think your batch of it looks delicious.

Thor Mom!
It was so reassuring to hear that Thor plays in his yard and goes for car rides. Honestly, I don't think Mango will ever get comfortable going on walks where he could run in to all sorts of strange and challenging situations. So my goal is to have fun with him within his limitations.

I don't know about Thor, but Mango is a dog who just really craves routine. Every week when I do housework I move the furniture around. I always do it in the same pattern, but it still upsets Mango to see things where they shouldn't be.

Thor is so wonderful and such a grand old guy. Love his big sloppy, smiling face.

I've never baked a whole chicken over rice either. I've been known to "cheat" a little with cut up chicken by using onion soup mix. It works GREAT!!!

As for that "ugly cauliflower," it sure doesn't sound ugly with all those "garnishes" and since it was devoured, I'm guessing it was delicious!!!

Thanks for sharing, Marjie. That rain storm was something else but at least it wasn't snow. UG...

You should come down here! It's pretty and warm and I won't critisize your cooking!

Sounds yummy... even if it is "ugly" lol

I think the whole meal looks comforting and delicious. I love dishes like this.

I want to try both recipes too!!

lol, I have had more than a few dishes that look about like that ;)

I would have overlooked the cauliflower and looked at that beautiful roasted "carcass". Great job, mom!