A while back, a fellow Calvert Homeschool mom, Lori, wrote that she had found eggnog ice cream in the store. This, of course, made me want it more than anything in the world, except possibly an invisible housekeeper, warmer weather, and a better metabolism so I'd never again have to worry about my weight. Well, we can't have everything we want, but we can have eggnog ice cream!

I do love eggnog. I probably learned this love from one of my grandmothers, who was allergic to eggs, and thus made her own special concoction called eggnog (which I despised, but had to try the real stuff after having hers, to see what the fuss was about). As near as I can remember, and we're going back to when I was about 8 or 9 here, folks, she softened vanilla ice cream and added rum and brandy, stirred it up, and gooped it into people's glasses. Yes, even mine. So, yes, I hated it, because the booze wrecked the sweetness of the vanilla ice cream. But I did love the store-bought stuff, and would drink it year round (and have a butt the size of Toledo) if I could.

Round one of eggnog ice cream was "G Rated", because I found Crown Royal, Johnny Walker Red, Smirnoff's, Jack Daniels, Drambuie, Creme de Menthe and Creme de Cacao in my liquor cabinet, but no rum. My dearly beloved dubbed it "almost right". Well, I never got to the package store for rum, so after a while, I sent Patrick, with explicit instruction that I needed rum for eggnog. He consulted a sales clerk, he consulted a bartender's book at the counter, and he decided that the recommendations in the book were to entice people to buy the pricier booze. So Patrick came home with pineapple flavored rum. (In case you wonder, it smells very much like pineapple, but still tastes like rum.) His rationale was that it was cheaper and, after all, "just a cooking ingredient". Arghhh! Well, that being all I had, I tried it, and my dearly beloved declared that it still wasn't quite right. What a surprise! Pineapple in eggnog is not good! 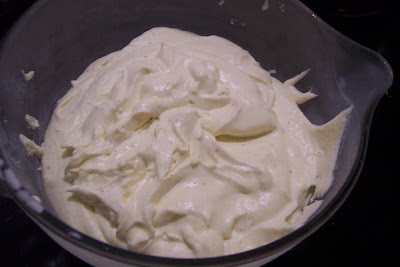 After a trip on my own to the package store, I finally had the right rum, which is any rum without extraneous flavorings, for anyone who might want to send a young, non-cooking guy to the store, and the whole batch disappeared in one dessert. My dearly beloved declared this to be perfect, and all is right in my little world. Now I finally present you with Eggnog Ice Cream, with both the original directions, and my somewhat easier and speedier directions.

Combine the cream, milk and sugar in a saucepan, and heat until the sugar dissolves and the mixture is hot, 5 to 8 minutes. Slightly beat the egg yolks in a separate container, whisk about 1 cup of the cream mixture into the egg yolks, then whisk this mixture back into the hot cream mixture. Stir and cook another 6 to 10 minutes, until the mixture thickens and coats the back of the spoon (at least 160F on a candy thermometer, if you want to be fancy). Do not let the mix boil, or the egg yolks will scramble and separate. Remove from the heat and cool for an hour on the counter, then whisk in the vanilla and nutmeg. Cool in the refrigerator until very cold, then process in your ice cream maker according to the manufacturer's directions, or freeze in your freezer, whisking every 30 minutes or so until it's solid. When the ice cream reaches the soft serve stage, stir in the rum and brandy, process another 1 to 2 minutes, the put it in the freezer for 3 hours or up to 3 days (ha!).

Whisk together 1 cup cream, the milk and the sugar in a large microwavable container. Heat in the microwave for 3 to 4 minutes, until the sugar dissolves, stirring every minute or so. Meanwhile, put the rest of the cream in the freezer, so it gets colder while it waits to join this delectable treat. Beat the egg yolks slightly in a separate container, add half of the hot mix to the egg yolks, mix well, and return to the hot mix. Heat in the microwave until it thickens, stirring every 30 seconds or so, about 4 to 6 minutes. Do not let the mix boil! Remove the last 2 cups of cream from the freezer, and whisk into the hot mix along with the vanilla. Chill. (I put it in the freezer for an hour; it worked fine and was a whole lot better than waiting the recommended 6 hours for the refrigerator to do the trick). Process according to your ice cream maker's directions. When it reaches soft serve stage, add the rum and brandy, let it process a minute or 2 longer, then put it in the container in which it will be stored, and freeze at least 3 hours. 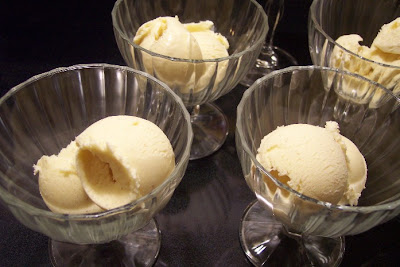 For G-Rated eggnog ice cream, just leave out the rum and brandy. Now, please, eat plenty! And serve it in pretty glasses; you'll enjoy it ever so much more!

you are impressive - its 'Marjies 31 Flavors' whats next? I havent seen banana yet (or did I)

Egg nog is one of my very favorite things, so is ice cream. You can imagine how happy this post makes me.

I am with you, pineapple rum with egg nog ice cream just doesn't work.

Pineapple rum would not work at all! I love eggnog. I will continue to purchase eggnog ice cream as I don't have an ice cream maker. Thanks for the instructions and pretty pictures. I can't believe your brood eats a serving that small, the girls yes, but the boys?

I had to scroll quickly past the titles and photos... The Knight is in the office and making his favorite holiday beverage in a frozen variety doesn't fit into my schedule. So far, so good. He hasn't seen Thor either...

Marjie, you could make one eat ice cream even in the North Pole...eggnog ice cream is a must!

Next you should put a scoop of eggnog ice cream in a giant cup of eggnog! *faints*

Okay what's the package store? Is that like a liquor store?

Egg. Nog. Ice. Cream. I think I'm going to swoon! Love your son's trip to the store story. :-) I've never heard of pineapple rum! That's my something new for the day!

Never tried eggnog, sounds and looks delicious - must put that on my "to do" list. Only have no spare time at all after puppy Bundy now rules my world... He is cute and wonderful, but somehow I had suppressed the amount of work related to the " the toilet is outside NOT inside" period...also the cat really hates him,and we are actually a bit scared for Bundy in this matter. The cat is surprisingly aggressive... any good advice ??

I love egg nog and don't care about the calories, that's what January is for. I agree with you, you need regular rum and your egg not ice cream looks great. I'm hoping Santa will get me my ice cream maker this year. I would love to try this.

You know...you NEVER fail me!

Marjie:
YOu're killing me! I just scrolled down and looked at your candy cane ice cream too. I want some this weekend with hot fudge sauce. I wish I had come sooner and seen your German drop cookie post. I would have made them for sure. I'll print it out for next year. I'm not letting that peppermint ice cream wait, though.

Believe it or not I don't think I've ever tried eggnog. Anyway, the inn where I work as a waitress, offered eggnog cheesecake this week so I had to try it. YUK! It tasted like medicine! Now at Halloween we offered hot buttered rum and it was pretty tasty; melted ice cream, brown sugar, and rum. A big blob was dropped into a cup with a shot of boiling water amd I promise it did NOT taste like medicine. Where on earth does one find good eggnog?